I. A Messianic Announcement

Isaiah 22:15-25 is a key passage in Isaiah. At first glance, it may appear to be an ancient detail about the inner workings of King Hezekiah’s court, one without much relevance today. A deeper dive, however, reveals another of Isaiah’s many messianic prophecies. The technical term for Isaiah’s making a double prophecy in two entirely different time frames is “synchronicity.” This section is a “synchronous” prophesy. Isaiah really does mean the human person Eliakim. And, he also really does mean Messiah.

A Brief Side Note Concerning the Historical Time Frame

First, however, how is it that Isaiah sets the prophecy in King Hezekiah’s Day, before the Assyrian invasion? The prior section, Isaiah 22:1-14, made reference to the Babylonian invasion and resultant captivity (see in particular verses 3-4, 8-11, 13; see also Isaiah-Journal 42). That invasion occurred over a century after the Assyrian. Yes, Isaiah has mixed his time periods. He hasn’t written in chronological order. He does that frequently.

The primary indication that the prophecy in the second division of chapter 22 occurs before the Assyrian invasion is the fact of the names. Isaiah specifically mentions Shebna (Somnas in the Septuagint) in verse 15 and Eliakim in verse 20. These two names occur together in 2 Kings 18:37 and 19:2. During the account of the Assyrian invasion, Eliakim was “over the household” of Hezekiah, and Shebna was the secretary.

The story that Isaiah relates in 22:15-25 teaches many lessons concerning the pitfalls of pride and the virtues of humble service. A more exciting message Isaiah packed into the passage, however, is the messianic prophecy he makes.

How Do We Know This Passage Is Messianic?

NOTE: The first portion of verse 22, “And I will give him the glory of David; and he shall rule, and there shall be none to speak against him;” is from the Septuagint. The Masoretic textual tradition does not contain these sentences.

Revelation 3:7 and its context indicate that Jesus Christ is the one “who has the key of David, who opens and no one will shut, who shuts and no one opens” (ESV). And, the New Testament is the best Christian commentary we have concerning the Old Testament.

2. The overall tone of Isaiah 22:20-24 is highly positive. God himself speaks (verses 15 and 25). He uses first person (“I”) when he bestows his favor upon his servant. Other than Isaiah himself (Isaiah 20:3), only Messiah has received favor in this biblical book so far.

3. Isaiah 9:1-7 is a prior messianic passage accepted by all. The word choices in that passage and this one show significant similarities. For example, consider the following. 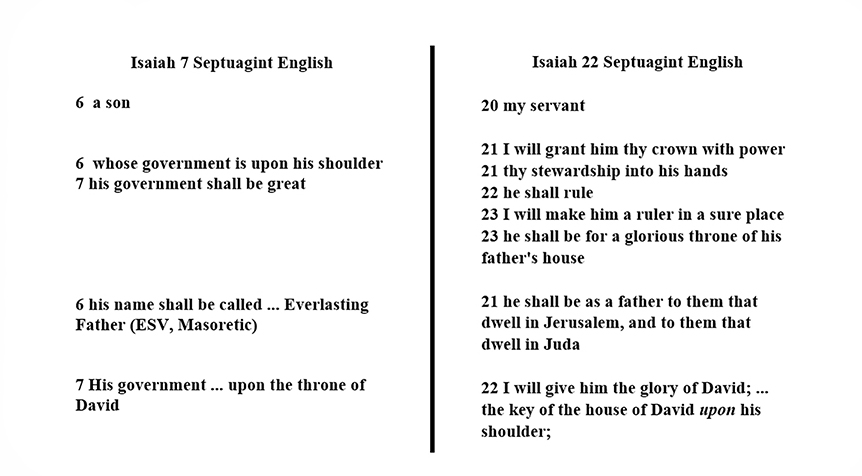 5. The fate of Shebna, the evil, prideful servant, is similar to the fate of Satan.

Isaiah 22:17 Behold now, the Lord of hosts casts forth and will utterly destroy such a man, and will take away your robe and your glorious crown, 18 and will cast you into a great and unmeasured land, and there you shall die; and He will bring your fair chariot to shame, and the house of your prince to be trodden down. (CAB, LXE)

When Jesus, God’s true servant, ministered on earth, he said he saw Satan fall from his position in heaven as the chief and most glorious of God’s created angels. (See also Isaiah 14:2).

Luke 10:18 And he said to them, “I saw Satan fall like lightning from heaven.

The Glories of Messiah

Eliakim, the human servant, performed well, according to the biblical record in 2 Kings. The glories of the servant Messiah, however, far outweigh the glories of  the human. What does this passage reveal about him?

Yes, Isaiah 22:25 appears to dash cold water on everything the prior verses proclaim. But who is verse 25 about? Is it about Messiah? Eliakim the man? Or, could it possibly refer to Shebna, the deposed steward? By way of forewarning, the discussion concerning verse 25 may be considered technical.